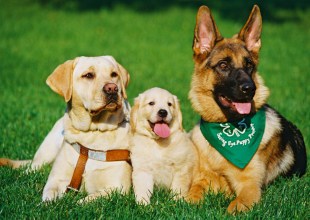 Photo from The Seeing Eye

Dog lovers and animal fans, take note - The Seeing Eye is a charity you'll want to, ahem, keep an eye on!

As they state on their website, their mission is "to enhance the independence, dignity, and self-confidence of blind people through the use of Seeing Eye® dogs." Not only is it a worthy cause, but the charity has proven to be a smash hit when it comes to auctioning off appealing items.

The Seeing Eye has run nine online auctions since 2009, and they often raise over $80,000 with their annual auctions. To date, they've raised $606,627 through the platform, and the most recent auction raised $82,000 from 538 bidders with 4,964 bids. Even more impressive is the fact that over $9,700 of those bids were raised from Seeing Eye-specific items!

Of course, it's not hard to believe it when you find out that they auction off puppy sponsorships - who wouldn't want to sponsor a litter of adorable pups? Also, they make it even more fun by naming their sponsorship levels Alpha Dog, Top Dog, and Perfect Pup. Their most recent auction received $7,500 worth of sponsorship, which just goes to show the power of cuteness when it comes to tugging on heartstrings.

For those in the bidding community looking for one-of-a-kind items, The Seeing Eye has had some of those up for auction as well. Past top-selling items include a guitar signed by Garth Brooks and VIP tickets to Lady Antebellum. Plus, they've got a famous name on their side - actress Betty White, who's donated some dinners over the years that sold for over $10,000.

One big takeaway from The Seeing Eye's success is that they have a strong knowledge of their audience, and they know how to engage with them. For example, they divide up their dog-themed items by various breeds - Labs, Goldens, and Shepherds - because they're aware of the most popular breeds for their supporters. This level of target marketing helps their auctions raise even more money!

The idea to put much of the auction items' focus on dogs and dog lovers is a winning tactic for The Seeing Eye, as many of their supporters love animals and appreciate how seeing eye dogs can help the blind live independent lives. Not only are they bidding on items that are relevant to their interests, but they have the satisfaction of knowing they're helping out a worthy cause.