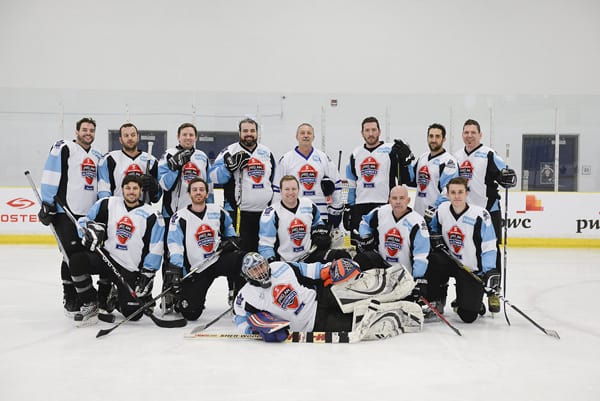 Located in Toronto, Ontario, Baycrest Health Sciences is a global leader in geriatric residential living, healthcare, research, innovation and education, with a special focus on brain health and aging. Their charitable wing, the Baycrest Foundation, provides funding that will help define the future of brain health.

One of the biggest threats to our brains is Alzheimer’s Disease, a common type of dementia that causes the brain to degenerate, leading to memory loss and usually total loss of function. In order to help raise funds for the Baycrest Foundation to research more on Alzheimer’s, former president of the Foundation, Mark Gryfe, saw an opportunity to develop a hockey-related charity event during the 2005 NHL lockout. This event became known as the Scotiabank Pro-Am for Alzheimer’s – the largest charitable on-ice hockey tournament in North America – and it’s been happening annually ever since!

Dawn Collins, Manager of Hockey Operations for Scotiabank Pro-Am for Alzheimer’s, explains, “We are the pioneer of having a charity hockey event with ex-NHL pros in Canada – nobody else did it before us.”

This year’s event raised $1.5 million for Alzheimer’s research, making the cumulative funds raised over 12 years to equal $31 million. With 435 registered players and 26 Toronto Maple Leafs and NHL alumni participants, the 2017 event was a smash success – especially considering the fact that 230 families came out to attend on the Family Day holiday.

The biggest contributor to the event’s continued success year over year is to have “a strong core of participants who care about the cause, and a team of people who are committed to making this event the best possible player experience possible.”

The challenge Baycrest typically faces is to keep the event fresh and exciting every year. Considering the fact that the event occurs annually, there’s always the need to reinvent and add new things to engage participants, particularly ones who return year after year.

One way that Baycrest was able to maintain an emotional connection with participants was by reinforcing the message behind the event. “We never had someone who has been affected by Alzheimer’s talk about it in front of a crowd during draft night, but then we had a couple stand up in front of audience and discuss the challenges of Alzheimer’s for the husband – who has it – and the wife, who has to see it every day.” This emotional story made for a memorable draft night, as well as reminding participants of the deeper cause behind the fun event.

As far as goals for the event, the end goal is clear: “To make residents of the GTA more aware of the significant impact Baycrest Health Sciences has on Alzheimer’s and dementia research and innovation in the GTA community.”

If you’re a charitable foundation looking to start holding your own event like Scotiabank Pro-Am for Alzheimer’s, take a page out of Baycrest’s book and leverage your connections – you might be surprised at who’s willing to help. And once you begin making your event an annual occurrence, continue to find new ways to surprise and engage your participants – it’s the key to creating not only regular participants, but potential supporters for life.